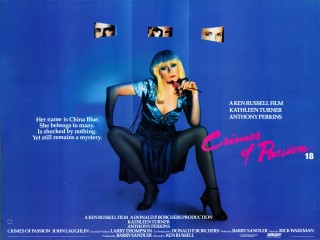 This is another movie that I have never seen and have decided to take it in tonight!

This is part of Outfest West Hollywood Series, a monthly program featuring films and discussions of interest to LGBT audiences.

Tickets are $10 but just $6 for Outfest members. Free parking if you can snag a spot at the library’s five-story structure.

About the movie: Outrageous filmmaker Ken Russell courted controversy once again with this wildly stylish and erotic thriller from screenwriter Barry Sandler (MAKING LOVE). Kathleen Turner in the same year as ROMANCING THE STONE shook up her screen image with her indelible performance as uninhibited sex worker China Blue, whose sensuality hypnotizes both a suburban husband (John Laughlin) and an unhinged street preacher (Anthony Perkins, acting with the brakes off). Still surprising and deliriously over-the-top after three decades, this cult classic will be followed by a discussion with Sandler and members of the cast and crew. Also starring Annie Potts and Bruce Davison.

Actor John Laughlin is scheduled to appear in the Q&A, alongside Barry Sandler.