WATCH: The most memorable moments of David and Patrick’s love story on “Schitt’s Creek” 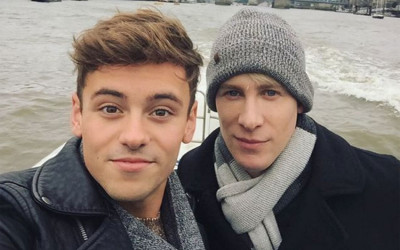 With the Rio Olympics now behind him, Tom Daley is looking ahead to other big events in his life.

One of those events is his wedding to fiance Dustin Lance Black.

‘The date hasn’t officially been set yet, we’re thinking sometime early next year – maybe spring next year,’ Daley said during an appearance this week on the Nick Grimshaw Breakfast Show.

It’s so grown up, isn’t it? I have no idea about where it’s going to be or what’s going to happen because Lance … is currently in LA editing (ABC miniseries) When We Rise.’

Daley is flying out to join Black, the Oscar winning screenwriter, in Los Angeles next week. Black has been in Rio cheering Daley on during the competition.

Daley, 22, joked that the event would be a ‘swimwear only’ wedding.

But the diver has focused on the positive and sounds upbeat talking about his Rio experience including such mishaps as the sink coming off the wall of his room in the Olympic Village on his first night there.

WATCH: The most memorable moments of David and Patrick’s love story on “Schitt’s Creek”