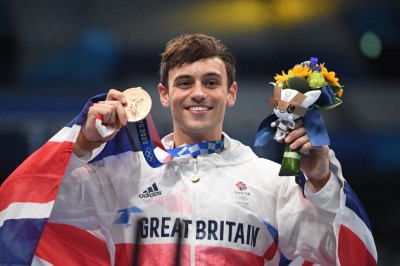 So happy for him.

Tom Daley earned a bronze in the men’s 10m platform final on Saturday afternoon in Tokyo.

To clinch his podium spot, Tom put up some of the highest individual dive scores of his entire Olympic career. But he faded in the latter half of the six rounds as China’s Cao Yuan and Yang Jian, the world champion, overtook him for gold and silver.

Going into the weekend, Daley was already an Olympic champion after winning his first-ever gold with partner Matty Lee in the men’s synchronized 10m platform on July 26.

“I’m so extremely happy to come away with a gold and a bronze medal from these Olympic Games, my most successful Games yet,” Daley told reporters afterward.

“And my husband (Dustin Lance Black) said to me after Rio [in 2016] that, obviously I was extremely disappointed. And he said to me that ‘maybe you weren’t meant to win gold this time because your son was meant to watch you win an Olympic gold medal,’ ” Daley said. “And the fact that I did that and then also another individual medal, which makes it four — my husband and my son, I’ve got to thank for so much of this along with my coaches and support team.”