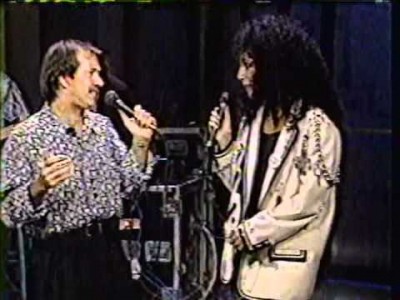 We can all certainly use some diversions these days and I’m finding a lot of comfort getting lost in YouTube wormholes.

Today’s meanderings brought me to the last time Sonny and Cher ever sang together on television – and maybe ever.

The year was 1987 and Cher was riding higher than ever with her movie career at its peak with Moonstruck out (she would later win the Oscars for best actress) and her first new album in six years. Sonny Bono, meanwhile, was running for mayor of Palm Springs (he would win and later be elected to the US Congress).

And for one special night on the NBC show Late Night With David Letterman, the former pop music and TV variety show duo reunited for a joint interview and (in the second video) then Cher is convinced to join Sonny to sing their first and biggest hit I Got You Babe which was number one on the charts in 1965.

Cher, still a top worldwide star, pays tribute to their music during a portion of her concerts and at 74 seems like she hasn’t aged a day.