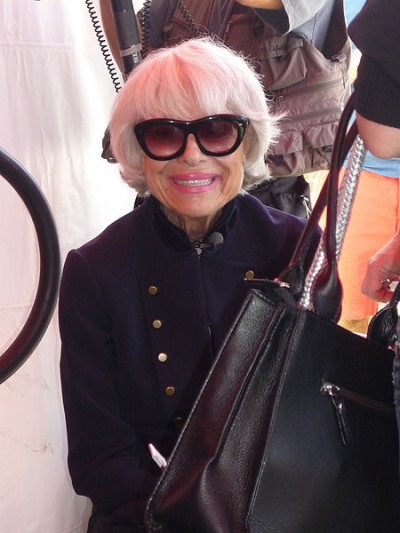 I took this photo of Carol Channing about eight years ago at the West Hollywood Book Fair and wanted to re-post it today on her 97th birthday.

This national treasure is a testament to remaining passionate and forever young.

She, of course, is best known for her Tony Award winning role of Dolly Levi in Hello Dolly which ran on Broadway forever then was a sensation in several later revivals.

But we also loved her in her Oscar-nominated role in Thoroughly Modern Millie and in her many hilarious talk show and sitcom guest appearances.

She is a force of nature and I hope she knows how many people appreciate her for sharing her great talent and energy with us for all these years and for all the work she and her beloved late husband, Harry Kullijian, have done to keep the arts in schools.

She has said the arts are like ‘fertilizer for the brain.’

Below is Miss Channing’s hilarious appearance on What’s My Line, her channeling Marlene Dietrich, a trailer for a fabulous documentary about her life that is a must-see as well her performing the wonderful ballad Before the Parade Passes By from her biggest hit show Hello Dolly. I’ve also included a memorable scene from the 1985 TV movie Alice and Wonderlandand, of course, her most famous line: ‘Rasberries!’.

Happy birthday to this great and enduring star.