Thursday Briefs: Rosie reaches out to Ashley Fink; Nate Berkus on cover of Next; Liza performs for Fallon

Rosie O’Donnell has never been afraid to speak her mind and God bless her for it.

But sometimes, the Emmy-winning talk show host’s words get her into trouble with her fellow celebs. Most recently, an interview Rosie gave to Access Hollywood panning Glee’s storyline involving the overweight high school character of Lauren (played by Ashley Fink) who is being pursued by one of the school’s jocks (played by Mark Salling).

I posted about this a few days ago but to refresh your memory, Rosie was quoted as saying: “Every woman I know who’s heavy has very strong feelings about that storyline. They’re like, ‘Can you believe that? I think it’s horrible. That never happens in school. That character is so unlikeable. Why didn’t they get a pretty heavy girl?’”

Rosie reached out to Ashley via Twitter today: “oh ashley – i love ur swagger – ur acting – ur face – ur heart – as a famous fat person – i am often asked about the issue … i love the story line – i love the show – and if in any way something i said hurt u – i apologize … u r so talented and i cant wait to hear u belt it …as i know u can- the often misquoted rosie”

Replied Ashley: “Awh thanks Rosie O! I adore you. Seriously heart you hard. I admire your strong opinions, and have always looked up to you… Now whadda ya say we make a karaoke date and show these folk how big girls get down?! Hahah. For real! Hollar at yo girl!”

NATE IN NEXT: It would seem to me that if you put a handsome guy like Nate Berkus on the cover of your magazine, a lot more people are going to be interested in picking up a copy!

So smart move by Next, the New York City gay guide, for featuring Mr. Berkus as his syndicated daytime show nears its 100th episode. Nate seems to have gotten a lot more comfortable as the months have gone on and is now very natural and funny.

“The Nate Berkus Show is sort of an extension of my personal belief system,” he tells the mag. “It’s a no-judgment zone; everybody is welcome here, and I’m very free in talking about my sexuality on TV. I want my audience to see people presented in a respectable way, so they can make their own decisions about how they feel.”

Here’s an excerpt from the article:

He’s almost two years into a relationship with a Columbia University-educated architect: they met at a mutual friend’s party. “He has a very level head,” Berkus proffers while keeping the guy’s name hush-hush. “Wise, very pragmatic and a creative person as well.” While he downplays what they did for Valentine’s Day (“I got him a book on a museum and we went to a friend’s party”), he’s more forthcoming about a few important events happening later this year: the launch of an expanded home product line in partnership with Springs Global and a new book.

And of course, he has designs in mind for future guests. “I would love to have Michelle Obama,” he muses. “I think she’s an incredible first lady and style icon. Writer Michael Pollan, because he changed the way I look at food through his book The Omnivore’s Dilemma. I eat no processed food as a result. And Tina Fey. Adore, love her. I know her. I actually am angling for a guest spot on 30 Rock. I can’t tell you the idea behind it, but I have a concept I would love to do.” 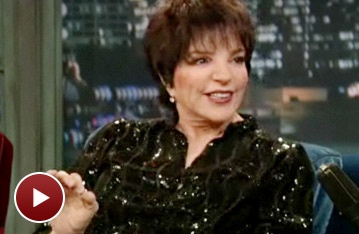 LEGENDARY LIZA: It is hard to believe but Liza Minnelli is turning 65 next month!
Since she has so famously had her ups and downs, it is so great to see this legendary star officially become a senior citizen. Not that she is acting like one!
Liza is busy promoting her new CD called Confessions and attending a Lady Gaga concert earlier this week at Madison Square Garden.
Last night, she appeared on Late Night With Jimmy Fallon and performed a little song for the host. I’ve included a clip but you have to sit through a brief recap of Larry King being interviewed by Piers Morgan on CNN last night first.
Enjoy!

Visit msnbc.com for breaking news, world news, and news about the economy