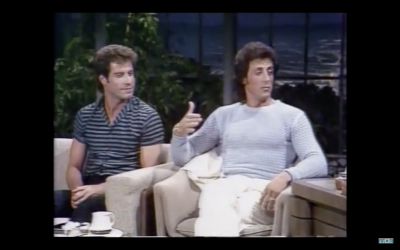 This popped up on YouTube and I just had to share it if only for the buff bodies and fashion worn by Sylvester Stallone and John Travolta.

They were on The Tonight Show with guest hostJoan Rivers to promote Staying Alive, the 1983 sequel to Saturday Night Fever. Travolta trained rigorously and lost 20 pounds to reprise his character of Tony Manero who has become a Broadway dancer. the film was a financial success, grossing over $65 million, though it was scorned by critics.

Stallone directed the movie as well as co-writing and co-producing it.

Trevor Donovan vows to shave off his “mitten”