Thomas Roberts is host of “The Advocate On Air” 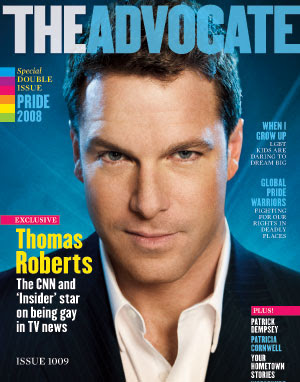 Got a note this morning from Thomas Roberts sharing the news that the the debut episode of the new television newsmagazine The Advocate On-Air has premiered with the former CNN anchor as host.

What is it about the Olympic Games that attracts so many gay people? As correspondent Derrick Shore finds out, it’s about much more than the pageantry of the opening and closing ceremonies. Follow “Olympaholics” Tyler Duckworth and Charley Walters as they venture to the Vancouver 2010 Olympics, revealing a behind-the-scenes side of the Games rarely seen by the viewing public.

Annise Parker, the out lesbian mayor of the nation’s fourth-largest city, sits down with reporter James Hattori and explains that Houston is more open-minded than you might think.

Gay rights measures are languishing in Congress, even with President Obama in the White House and Democrats in control of Congress. And, as Washington Correspondent Kerry Eleveld reports, many gay people are turning to the Human Rights Campaign and asking, “What gives?”

Advocate Editorial Director Jon Barrett talks about The Advocate On-Air and how the new TV show is a perfect fit with the 42-year-old magazine and how this extension of the brand brings The Advocate into the 21st century.

The entire premiere episode of The Advocate On-Air is available at:

It’s so great that Thomas is anchoring the show. He seems like an ideal choice – especially since he attended the National Lesbian and Gay Journalists Assn. conference in Miami four years ago and talked about being an openly gay man in television news.

He had certainly paid his dues by that time starting out as a reporter for a small cable station in Maryland then working as a writer/field producer for the NBC affiliate in San Diego. He also spent time at the ABC affiliate in Nebraska before landing in Fort Myers, Florida as a nightly news anchor and investigative reporter for the FOX station followed by a stint as the afternoon co-anchor and investigative/consumer correspondent for the NBC affiliate in Portsmouth-Norfolk-Virginia Beach, Virginia.

Thomas, 37, left CNN a few years ago and spent some time as a regular correspondent for The Insider and hosted red carpet coverage of the Screen Actors Guild for TNT.

FILE UNDER: Newsmakers, Out Stars