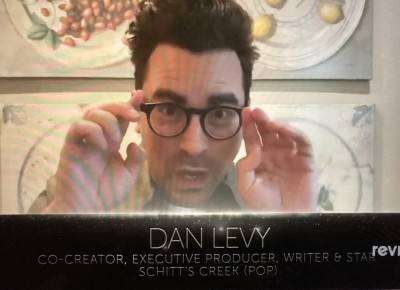 The alternate-universe adventure Watchmen took two awards: Best TV Movie or Limited Series and Most Visually Striking Show. Star Regina King, a nominee for the miniseries and a previous Dorian film award winner for If Beale Street Could Talk, was upbeat in thanking the Society for “not one but two Dorian Awards. Love it, Love it!”

King told the Society’s members she felt that one of the reasons series creator Damon Lindelof’s imagining of the comic book, navigating themes of power, racial conflict and identity, proved so popular is “you. You’ve written so favorably about the show.” She also spoke warmly of Watchmen’s writers and cast mates, including TV icon Lou Gossett Jr. (Roots), who in the show played the elder version of—spoiler alert—gay superhero Will Reeves.

Lindelof, though, was more somber in accepting Watchmen’s chief award. “I know the Dorians celebrate all kinds of film and TV shows that don’t necessarily need to be LGBTQ-themed, but we take particular pride in the fact that there is a queer character at the very center of Watchmen: Will Reeves,” said Lindelof. “We started this story by asking a simple question: Why would a superhero need to hide their face? If they were truly fighting for justice, the answer seemed obvious: Because the world wasn’t ready to see who they really were. And so Watchman became this story about unmasking, about understanding the pain and trauma caused by ignorance and hate.” 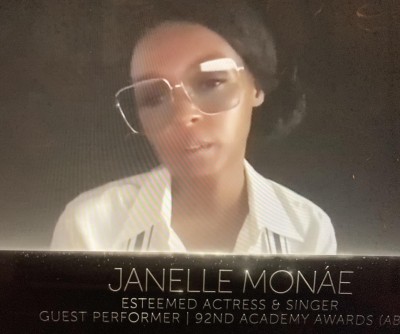 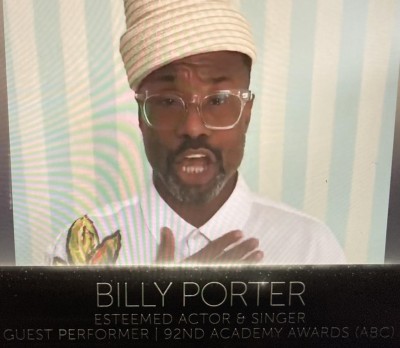 Monáe, accepting her joint-win with singer-actor Billy Porter for Best TV Musical Performance for their dazzling duet at the start of last February’s Academy Awards, said the experience of performing that night “was a dream” and that, when it came to asking Porter to join her, “There was no other person I could think about sharing that stage with.” She added: “I’m just so grateful that we got an opportunity to be ourselves. Our performance was rooted in community and making sure to amplify all of the marginalized voices, specifically our black and queer community. It wasn’t just about us. It was about all of us. I’m so honored to be honored by GALECA.”

Porter returned the affection. After admiring his Dorian award—“Look at how lovely this is!”—he thanked his stage mate Monáe for “putting her neck out for me and making sure that grampa – I – was there with her.”

America’s current, seemingly endless string of troubling headlines proved fodder for the Toast’s winners, presenters and Society members throughout the show. Referring to the new era of social distancing, “There are people in the Trump administration that’ve gone to jail and gotten out sooner than we have from our lock-up!” half-joked host Karel from his Las Vegas home, which served as home base for what the boisterous performer called the special’s “virtual pub.”

Before talk radio favorite Stephanie Miller announced Eve as best drama, she quipped as she ran through the category’s nominees. Sample: “Better Call Saul—the story of a fixer that for a change doesn’t have Donald Trump as a client.” And Vilanch, in presenting Campiest TV Show: “We all know what camp is, or we think that we know what camp is for me. It’s failed seriousness. In other words, the Trump administration.” 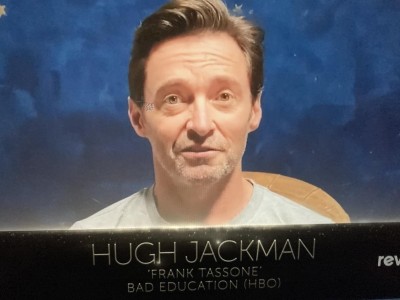 Jackman took Best TV Performance—Actor for his unsettlingly seamless portrayal of a true-life public school embezzler in HBO’s Bad Education. In presenting the award, Rafael Casal, who played the star’s illicit lover, noted the movie “really tells the story of today’s America, a story about a con man using the system to benefit himself and rob the people he’s supposed to serve, all while the ceiling is caving in—and he’s eventually stopped by teenagers. Thank you, TikTok.” Regarding his acting partner, Casal quipped: “He even let me two-step better than him on camera, which I think tells you the kind of class act he is.”

Piping in himself, Jackman, in thanking GALECA, his director and costars including Casal, said his Dorian award “really, really means a lot . . . (making Education) was just one of those incredible experiences. This is just icing on the cake.”

Oliver, bringing it home—literally—in a video shot at his COVID 19-era TV desk, said, “Thank you so much, GALECA, for this Dorian Award.” He added he hoped members “were safe at home and not at a mask-less Jacksonville pool party.”

Yet it was the uplifting sixth and final season of Schitt’s Creek that scored five Dorians. The scrappy farce, about a once-rich and la-de-da family whose suddenly meager finances make them face reality, won Best TV Comedy and Best LGBTQ TV Show (just as the show did for season four). Creek matriarch Catherine O’Haragrabbed the award for Best TV Performance—Actress, with cast mates Annie Murphy and Levy honored in the supporting categories (Levy’s father Eugene Levy was nominated here for best actor). Levy was also bestowed the group’s special Wilde Wit accolade, named in honor of Oscar Wilde (the Dorian Award itself counts as an homage to Wilde’s only novel, The Picture of Dorian Gray).

Levy, echoing King, told GALECA members he appreciated the Society “for supporting our show from day one . . . It is a great honor to be recognized by all of you, because, let’s be honest, you got good taste.”

There were other winky moments:

- Vilanch, presenting that Campiest show category, opined of nominee Dolly Parton’s Heartstrings, “The title alone! Can Dolly find her heartstrings under all that boob?”

- Presenter Dave Koz whipped out his shiny sax to play a few notes and herald Best Unsung TV Show winner What We Do in the Shadows.

- In accepting on behalf of that vampire comedy, Harvey Guillén, who plays secret and reluctant bloodsucker slayer Guillermo de la Cruz, warbled a spoofy impromptu song to express his excitement over GALECA’s pick.

- And RuPaul’s Drag Race All Stars winner Chad Michaels, also known for impersonating Cher to perfection, was a novel choice to announce the Most Visually Striking Show category. Quipped Michaels: “I know how much hard work it takes to look visually striking!” Accepting the Visually Striking award were production designer Kristian Milsted and director of photography Gregory Middleton.

“The presenters and winners really outdid themselves with their virtual appearances,” said GALECA Executive Director John Griffiths. “I’m still laughing over Josh Thomas’ hilarious, must-be-heard insight about life during the pandemic. And our host Karel did an amazing job, especially considering he was flying virtually. He’s such genuine, enthusiastic fan, and that makes an awards show much more fun. He also gets how much power TV has in transforming and uplifting lives. That makes the viewing experience more meaningful.”

Griffiths added he was “truly giddy” over GALECA’s revamped trophy, individual art pieces of the winners inspired by Oscar Wilde’s The Picture of Dorian Gray. “Everyone gets a colorful portrait of themselves on a little easel with a velvet drape over it!”

Moreover, the Dorians TV Toast 2020 introduced not one but two theme songs, the Cheers-evocative “Raise a Glass!” and the more rocking “Toast,” rockingly performed by Irish-meets-Vegas band The Black Donnellys.

The first recipient of the Society’s special career-achievement honor, The “You Deserve an Award!” Award—going to what the group deems “a uniquely talented TV icon we adore”—will be announced at a later date.

Starting under the original banner Gay and Lesbian Entertainment Critics Association, GALECA’s Dorian Awards have gone to the best of all of film and TV — not only LGBTQ-themed — since 2010. While this year marks the inaugural Dorian TV Awards, this is actually the 12h go-around for members voting on their best-loved TV programs and stars. Come first-quarter 2021, the Society will add to its choices for the finest in theatrical releases for its first separate Dorian Film Awards.

BEST UNSUNG TV SHOW
What We Do in the Shadows (FX)

The show will be available through Revry, the LGBTQ+ streaming network, available globally at watch.revry.tv. For more information about the Society and its Dorians Toast, visit GALECA.org and DoriansToast.com.

GALECA: The Society of LGBTQ Entertainment Critics’ Dorian Awards exist in great part to help remind bullies, bigots and at-risk youth that the world has a history of looking to “the Q eye” for tips on what’s great across all of entertainment. After all, how would the world fare without knowing what’s campy? A registered nonprofit professional organization, GALECA consists of over 270 active critics and journalists who write for legitimate media outlets in the United States, Canada, Australia and the U.K. Visit GALECA.org for more info, and stay in the loop with our activities @DorianAwards on Twitter and Facebook and @Dorian_Awards on Instagram.