The return “The Rosie O’Donnell Show” to benefit The Actors Fund was everything – and raised more than $500,000! 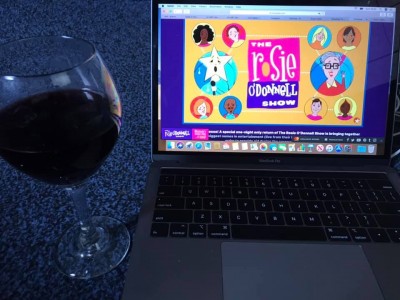 Oh, I can’t think of a better way to spend my Sunday than to devote more than 3.5 hours to watching a special edition of The Rosie O’Donnell Show.

I poured myself a glass of wine and settled in to watch this epic show that raised more than $500,000 for The Actors Fund, a charitable organization that supports performers and behind-the-scenes workers in performing arts and entertainment, helping more than 17,000 people directly each year.

The benefit show was the brainchild of actor Erich Bergen, a Broadway star (Jersey Boys) who was also regular on CBS’s Madam Secretary for six seasons. He made cameo appearances on the show whenever there was a technical glitch. It was available on YouTube but I watched it on Broadway.com.

Rosie, a Broadway veteran herself (Grease, Fiddler on the Roof, Seussical) was the ideal host because she has long been one of Broadway’s biggest cheerleaders. A multiple Tony Awards host, she regularly featured Broadway stars on. her daytime talk show back in the 1990s and many of them showed up tonight – all from the comfort of their own homes.

Tony and Emmy winner Billy Porter, star of Pose, reminisced with Rosie about the eight times he was on her talk show when he was a relative unknown outside Broadway: “I was Bette Midler to your Johnny Carson,” he joked.

The most poignant interview was with Tony winner Gavin Creel who was feeling unwell but still performed a song. He has not been tested but he believes he is positive for the coronavirus as have been some of his cast members from the London production of Waitress. He is currently isolating at his home in upstate New York.

Greel described feeling as if he has a “cruddy flu” with fever and headaches and a loss of his sense of taste and smell. But he is not experiencing any breathing problems.

The finale was a a three song set from Barry Manilow who sang I Can’t Smile Without You, Copacabana, and I Made it Through the Rain.

It was all so glorious and made me feel happy for threes-and-a-half hours instead of worried. Thanks to all involved and mostly to Rosie who not only hosted, but donated $100,000 to the cause!

Below are some of the highlights:

And finally, below is the ENTIRE 3.5 hour show for your enjoyment!