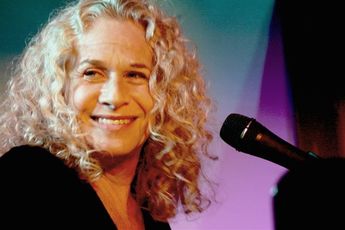 One of my favorite events on the calendar is An Evening With Women – a musical event that benefits programs at the Los Angeles LGBT Center.

But I have a feeling that this year will top all – from my perspective at least – because the news came down over the weekend that this year’s musical headliner is the legendary Carole King.

It all began when I was a kid and my big sister had the single It’s Too Late and would play it over and over then flip it over and play the B side which was I Feel the Earth Move.

Years later I bought Tapestry – first on cassette then on CD – and in different periods of my life played it on a loop.

Miss King, one of the great songwriters in pop history, is 75 and still in great form.

The Tony Award winning Broadway musical Beautiful tells the story of her epic life and is filled with her many great songs (some made famous by others) including You’ve Got a Friend, Natural Woman, Will You Still Love me Tomorrow, Up On The Roof, Where You Lead, So Far Away, One Fine Day, Locomotion, Jazzman and literally on and on and on.

The only thing Beautiful was missing when I saw it at The Pantages last year was Miss King herself.

She won’t be missing from An Evening With Women where she is expected to perform a five-song set.

The evening will also feature a special performance by The Vagina Monologues author Eve Ensler, comedy from Tig Notaro, a musical performance by Grace Mitchell, and hosts Cameron Esposito and Rhea Butcher at the world-famous Hollywood Palladium.

Here is a LINK for more information, for tickets and to find out how to get involved as a table host.

Let’s enjoy some Carole King performances to get ourselves even more fired up as we count down the days until the big night.