It may have been 12 years since Ellen DeGeneres famously said “Yep, I’m gay” but it doesn’t seem that network television is any more welcoming to a lead lesbian character now as it was then. Remember, Ellen did not last too long after the character – and the actress – came out. 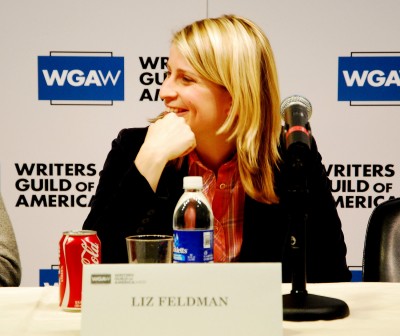 Last night at a Writers Guild of America event called “Gay Today In Hollywood: A Status Report,” Liz Feldman, a four-time Emmy winning writer-producer  for The Ellen DeGeneres Show, told of her experience trying to get her idea off the ground. I was sitting in the front row and recorded it so will let Liz tell it in her own words:

“I really wanted to develop a show with a lesbian lead character. I wrote a spec script about me and my straight guy best friend, kind of the reverse of Will & Grace … and I got some nice attention for it and was able to get a development deal with ABC Studios. What I sold to them, however, was a very straight show because I wanted to get a deal. They read the gay script, they liked the gay script but they were like, ‘What else do you have? We think you’re a little bit ahead of your time.’ This is about a year ago (laughter from audience).”

“So I pitched them a very mainstream show about a straight single girl and her group of married friends. Yawn. I was bored with it myself and sort of thought I could sell it and I did. (laughter from audience) They were very aware of who I am and the kind of people I like to sleep with and things like that. So I’m developing this very straight, very mainstream show for ABC studios and about five days after the election, I get a call from a lovely executive who actually really do adore and she said: ‘I have a radical idea. What if we made the lead character a lesbian?’ (audience laughs). At this point, I said, ‘Remember six months ago when you said I was ahead of my time? Was I six months ahead of my time?’ So I revamped the entire show, threw out the entire show and created a very sort of down-the-middle half-hour sitcom about a lesbian and her homophobic mother who has to move in with her because her third husband has left her and taken everything. It’s called Get Used To It.

It got great feedback from the studio and would you know, ABC the network passed. Isn’t that crazy?  Then they sent it over to other places – I won’t name names – and everybody passed. Nobody wants to make thar show….I’m determined. It might take a really long time but I promise you that there will be a sitcom or a half-hour single-camera with a lesbian lead character. (audience applause).