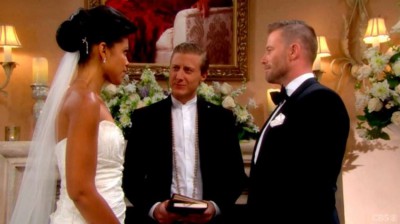 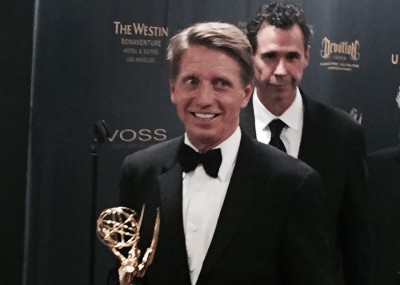 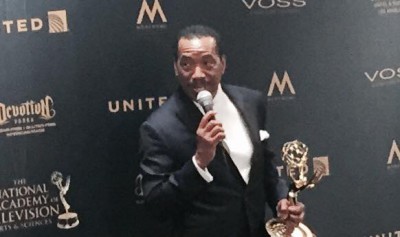 The Bold and the Beautiful won two Daytime Emmys on Sunday for its storyline that included the first transgender character in soaps history get married.

‘It’s really trying to bring daytime into a place where it reflects what’s going on in the world today,’ Bell (pictured, left) told we reporters backstage.

‘The transgender issue is very topical – so much to explore. It made for a great love story.’

The storyline had the character of Maya Avant come out as transgender last year.

Maya had been introduced to viewers in 2013 as an ex-con turned actress/model.

She became romantically involved with young entrepreneur Rick Forrester (played by Jacob Young) who was not aware that she was transgender.

Maya came out as transgender to Rick after a tabloid writer threatened to go public with the information. It turned he didn’t care and married her in an episode that aired last August.

Bell said the show had the storyline in the works well before Caitlyn Jenner came out as transgender last spring and there was zero pushback from CBS which airs the soap.

‘I was expecting (pushback) and it never happened,’ Bell said. ‘It’s been incredible smooth sailing.’

He added: ‘Love is love and you just celebrate it when you have it because it can be very fleeting.’

Babatunde, who plays Maya’s father, described himself as ‘thrilled’ to have the storyline recognized by Emmy voters.

‘It feels sensational. It’s a joy unspeakable. I’m very seldom at a loss for words,’ he said backstage. ‘The beautiful thing we are portraying is … growth and development.’