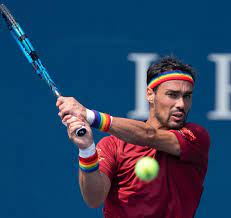 Italian Tennis pro Fabio Fognini took the court earlier this week in Washington DC in a rainbow-colored sweatband and matching wristbands for his opening-round match.

Why so eager to show he’s an LGBTQ ally?

Because a few weeks earlier when he was competing in the Olympic Games, Fognini was losing his match and called himself a frocio which is the Italian word for f*ggot. The incident went viral.

He later explained himself on social media: “The heat went to my head. In today’s match I used a really stupid expression towards myself. Obviously, I didn’t want to offend anyone’s sensibilities. I love the LGBT community and I apologize for the nonsense that came out of me.”

He went the extra step with the rainbow bands. Some may want to stay mad at him and I must say, it’s hard to believe grown men (he’s 34) are still using anti-gay slurs even if it is just on themselves. But I think he has taken some good steps since the incident and hope he can now become an even more visible LGBTQ ally.