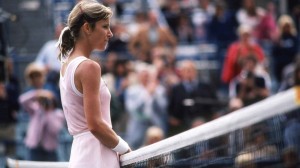 My all-time favorite tennis player Chrissie Evert is showing us her grit off the court. I will be watching this HBO Sports special tonight on her battle with cancer and the role her late sister played in saving her life.

The ESPN tennis analyst calls matches with an authority few can have because during her Hall of Fame career she won three Wimbledon titles, a record six US Open crowns, a record seven French Opens, and two Australian Opens (she rarely competed Down Under). I think, year in and year out, she was just the best there ever was.