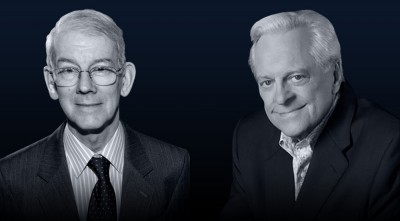 Robert Osbourne lives on at the TCM Classic Film Festival.

In honor of the late host, Turner Classic Movies will present The Robert Osborne Award to celebrated film preservationist and director Kevin Brownlow for his lifelong dedication to restoring and preserving film, as well as championing film history, at the 10th annual Festival which runs April 11-14 this year in Hollywood.

The inaugural award last year went to Martin Scorsese. It is presented to an individual whose work has helped keep the cultural heritage of classic film alive and thriving for future generations. Osborne served as the host of Turner Classic Movies for 23 years, and his passion for film and wealth of knowledge as a film historian helped preserve classic film’s legacy.

Brownlow is deeply respected and revered among his peers for his work in restoration of classic film. The celebrated director has helmed such classics such as It Happened Here (1964) and Winstanley (1975). But his focus has remained documenting and preserving the silent film era. Brownlow founded Photoplay Productions to produce documentaries on film and revive such silent classics as A Woman of Affairs (1928), Sunrise (1927) and Napoleon (1927). The latter represented more than 25 years of work for Brownlow, who is still looking for ways to improve on Napoleon’s restoration. The 1979 premiere of the restored version of Napoleon brought Brownlow honors from the New York Film Critics Circle, the National Board of Review, the Los Angeles Film Critics Association and the London Critics Circle. In 2010, Brownlow received an honorary Oscar for his work as a film preservationist.