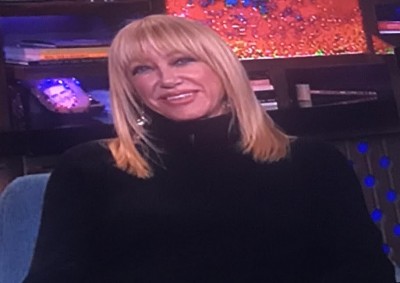 Suzanne Somers, 73, still has sex with her 83-year-old husband twice a day.

That’s what she said tonight on Watch What Happens Live.

But I was more interested in what she said about a falling out she had with Barry Manilow’s husband Garry Kief after she publicly confirmed that she had attended the longtime couple’s 2014 wedding the last time she was on WWHL in 2015.

Manilow, now 76, had never publicly confirmed that he is gay despite being with Kief for 40 years.

“His husband got very mad at me,” Somers said.

She and Manilow are good, the former Three’s Company, She’s the Sheriff and Step by Step star said. But not so the husband.