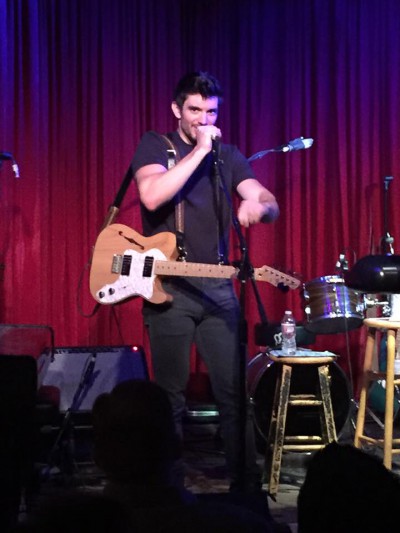 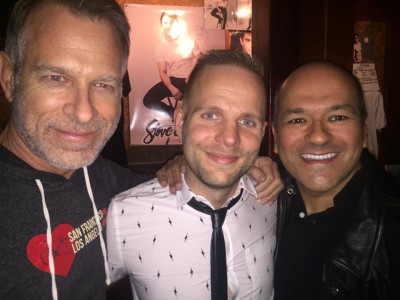 Steve Grand and Tom Goss performing together on the same bill within driving distance of my house?

That was Saturday night and I was so there.

My pal Jim Key and I attended the show with Jim’s parents at Hotel Cafe and what an outstanding show they gave us. (Jim and are pictured below with Tom Goss after the show).

Tom has never been better as far as I’m concerned. He puts so much heart into his music and just swept us away with All My Life, Breath and Sound, Son of a Preacher Man and several more first-rate songs. Especially touching was Mama, a song Tom wrote about the time his mom asked if Tom and his husband could pretend to not be gay for some houseguests.

Steve delighted the crowd with his tight T-shirt but backed up his heartthrob looks with a wonderful concert.

He performed All-American Boy towards the end but his fans also know and love such songs as Back to California, We Are the Night and Stay. I loved his covers of Fire and Rain and Bennie and the Jets too.

It was in July 2013 when Grand’s self-financed All-American Boy hit YouTube and became a viral sensation.

He talked a bit between songs about the crazy ride he’s been on since then.

‘All the best and worst things in my life have happened in that time,’ he said. ‘Sometimes I definitely had dark moments where I wondered, “Would I have been better off if I just worked in a cubicle or something?”‘

Audience members answered the question for the 26 year old by shouting ‘No! No!’ 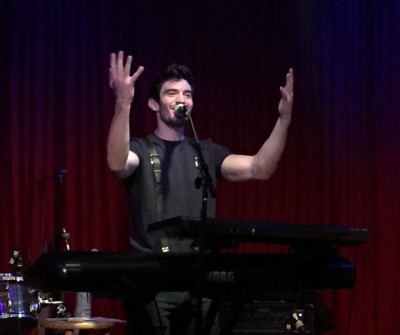 Grand has an active social media presence and at times been controversial for comments in interviews and seemingly contradictory complaints about getting as much attention for his underwear as his music.

‘You learn and you grow from that and I’ve come to be grateful for everything that happened – even all the bad things because I’ve come to feel that I’m the person I am because of all those trials and tribulations.’

He also told us that it’s only in the past year that he’s learned to perform sober which he thinks makes him a better performer.

He was sure to add that being sober doesn’t mean he’s not still great in bed.