Sondheim Sunday: The delicious “Worst Pies in London” from the musical “Sweeney Todd” 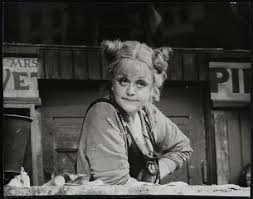 Today we shine a spotlight on one of the most memorable songs from Sweeney Todd: The Demon Barber of Fleet Street.

Early in the show, Todd enters a meat pie shop on Fleet Street, where the owner, Mrs. Lovett, laments about the scarcity of meat.

In “Finishing the Hat,” Stephen Sondheim wrote: “‘The Worst Pies in London’ illustrates as well as any other song in this book the second principle of my mantra: Content Dictates Form. Mrs. Lovett is not only a chatterbox, she is a glitteringly disorganized one…The mercurial eruptive quality of her scatterbrained chatter calls for an irregular song form, something that feels closer to rapid recitative than to song.”

Angela Lansbury won her fourth Tony for originating the role on Broadway. Decades later Patti LuPone was n dominated for her performance in the Broadway revival.

Here are the versions sung by those two legends plus other big names giving it a go.