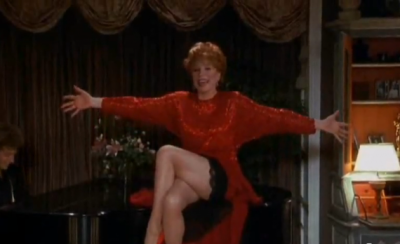 Many of our biggest female stars have belted out I’m Still Here which is from the Stephen Sondheim show Follies.

My favorite version is Shirley MacLaine’s. Not because it’s technically the best but because it is performed in such an important scene in the 1990 film Postcards from the Edge and it tells us so much about MacLaine’s character and her relationship with her daughter (played by Meryl Streep).

But that doesn’t mean I don’t love Elaine Stritch’s knockout performance or Elaine Page’s. Here are those and some others including Patti LuPone, Polly Bergen, Shirley Bassey, Eatha Kitt, Ann Miller and Yvonne DeCarlo.

Let me know your favorite.