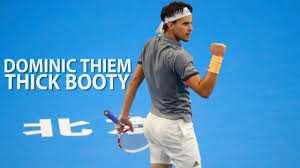 And yet, some people insist on objectifying him.

I’ve been mad about this gorgeous Austrian for a few years now and enjoyed watching him move his way up the ranks and score multiple wins over Novak Djokovic, Rafael Nadal and Roger Federer.

His next step is doing it in the finals of one of the sport’s four grand slam tournaments.

In the meantime, we can enjoy his beautiful game, his handsome face, his occasionally frosted hair, and well, that “thick booty.”