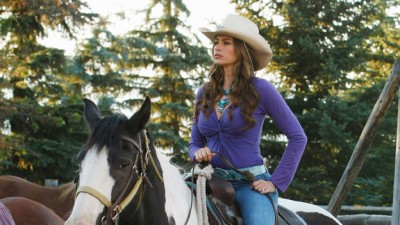 There’s more than meets the eye and ear when it comes to Sofia Vergara, whose stars in the hit ABC comedy Modern Family.

The two-time Emmy nominee sat with The Advocate’s Brandon Voss and explained why she supports the Latino gay community but didn’t want gay children of her own.

On her gay fans: “I’ve always had plenty of gay fans, even back in Colombia, probably because I’m voluptuous and a little over the top. Gay men always tell me how fabulous I am. I think they want to be Gloria. … All my fans must be very respectful, because I’ve never had a guy or a girl come up and grab my ass.”

On her girl crush: “I have many, but I love Halle Berry. She’s perfection. Every time I see her, I want to give her a standing ovation because she’s so flawless.”

On not wanting to raise gay children within the homophobic Latin community: “Most of us are raised very Catholic, and the macho figure is very strong in our culture, so it’s still more taboo and a million times more dramatic to come out. Many gay friends have told me how hard it was for them to be open in the Latin community. … When I was younger, I remember thinking, I hope my son or daughter isn’t gay. Not because it’s a bad thing but because I knew how hard it is in the Latin culture to be gay. Life is already difficult, and it’s hard enough to find someone and be happy, so I thought that being gay would just triplicate the trouble. ”

On whether it was challenge to play a transsexual in the 2006 direct-to-video movie Grilled: “No, because I look like a transsexual anyway. I’m a woman, but I’m super-exaggerated with my boobs, my ass, my makeup, and my accent. When I get ready for an event, I always look at myself in the mirror and say, ‘I look like a transvestite!’ I love it.”

On Jane Lynch, her past and present Emmy competition: “When we see each other, we kiss and hug each other. I really admire her. Her role on Glee is amazing, and you know what? She deserved to win. I love her. But yes, the media does seem to want us to have this funny rivalry, and I don’t mind.”

Here is a LINK to the entire interview!