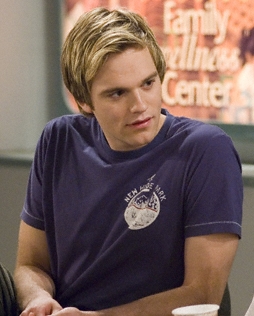 Noah does not appear in this episode which is good because lately he has been very annoying! Luke has bigger things to worry about anyway than the latest mood swing of his blind boyfriend.

Luke confronted his dad Holden about what exactly happened the last time he saw his bio-dad Damian. Holden confesses that he and Damian fought and that he placed an unconscious (or dead) onto a departing ship.

“He was my biological father and I have a right to know what happened with him. You shouldn’t have lied dad,” Kuke says to Holden.

Then, about five seconds later, Luke is able to figure something out that the hapless cop Margo never could have: the body discovered off the coast of Malta is, of course, not Damian. How does he know? Because he literally bumped into hottie doc Reid Oliver who took one look at the body in a photo presumed to be Damian’s and can see – with just a quick look – that the person in the photo had an advanced stage of Huntington’s Disease!

Since Damian was healthy – at least physically – the corpse cannot be his!