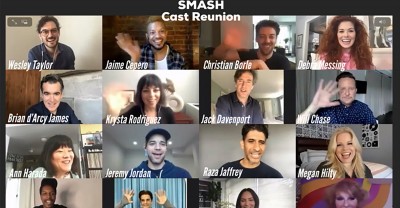 The stars of the NBC musical drama series Smash, which sadly only last two seasons, reunited a few days ago.

Their virtual reunion was preceded by a special one-night-only streaming event: Bombshell in Concert. The event, announced by The Actors Fund in association with PEOPLE, featured the never-seen sold-out live performance of Bombshell in Concert that electrified Broadway at the Minskoff Theater in New York City in 2015.

The Bombshell in Concert livestream, produced by Neil Meron and Bob Greenblatt, continues the musical’s association with The Actors Fund, which provides a safety net for performing arts and entertainment professionals. To donate, visit ActorsFund.org.