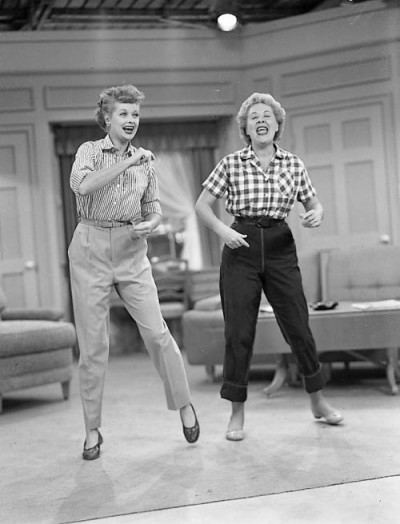 We know the comedy chemistry between Lucille Ball and Vivian Vance made them a pair beyond compare.

But today I focus on their rare duets – the most famous of which is Friendship from an episode of I Love Lucy where they are slated to perform at a benefit and end up having an onstage fight when they both buy the same dress, promise to take it back, and neither does. The video here is mostly when they sing the song at the apartment for Fred and Ricky and I like that one best because it’s the truth about their characters.

The first video is believed to be their final on-screen duet – it’s from an episode of Here’s Lucy when ran from 1968-74. Even though Miss Vance left The Lucy Show after its third season (the show ran 1962-68), she returned each year for a guest spot and continued the tradition on Here’s Lucy. Miss Vance looks terrific in this episode.

The third video is the least special but still fun. It’s from an early season of The Lucy Show (I think!) and I do believe Lucie Arnaz plays one of the teenagers and I think another one is Don Grady from My Three Sons and The Micky Mouse Club fame.