Showtune Sunday: All about Lucie Arnaz!

Lucie Arnaz was born with the kind of purebred showbiz genes that can only rival Liza Minnelli’s.

I saw her perform in 2008 at an Actors Fund event inside the Pantages Theatre and she was absolutely dazzling. What was even more cool is that Lucie – the very talented daughter of Lucille Ball and Desi Arnaz, remains amazingly youthful, full of energy and in good voice.

She may have gotten her start co-starring with her mother (and brother Desi Arnaz Jr.) on the Here’s Lucy series but Lucie made it big on her own not long after. She made a big splash on Broadway starring in They’re Playing Our Song and went on to also star in Lost in Yonkers and Dirty Rotten Scoundrels. 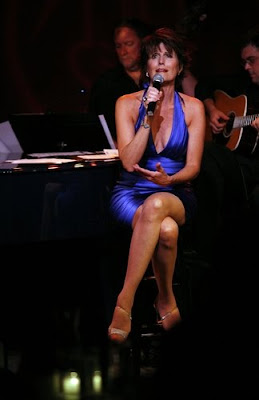 She’s one of the rare performers who has headlined in television (The Lucie Arnaz Show, Sons and Daughters), on Broadway and in films (The Jazz Singer, Billy Jack Goes to Washington). She performs in concert all around the world and also produced the 1993 Emmy-winning documentary on her famous parents Lucy and Desi: A Home Movie.

“I’m doing whatever appeals to me at the time,” Lucie told me after that Pantages show in 2008. “I’m an actor who sings and dances and I like to produce and do documentaries. I jump all over the place and maybe that’s not such a good thing because people wonder, ‘Where is she? What does she do?’ But it’s been a great life, lots of different plains.”

It’s a life that has not been all about work. She has three children – Simon, Joseph and Katharine – and her husband Laurence Luckinbill has two more – Nicholas and Benjamin – from his previous marriage to actress Robin Strasser.

“I raised three gigantic children so that’s been my priority for a long time but now they’re out of the house!” Lucie said. “They live on their own and make their own kind of music – literally. And I can get on a ship go to Hong Kong or wherever whenever I feel like it.”

To celebrate the magnificent Lucie, here are three numbers: Hey Look Me Over from her mother’s 1961 Broadway hit Wildcat; The Best is Yet to Come and finally; the title song from Lucie’s biggest Broadway hit They’re Playing Our Song.