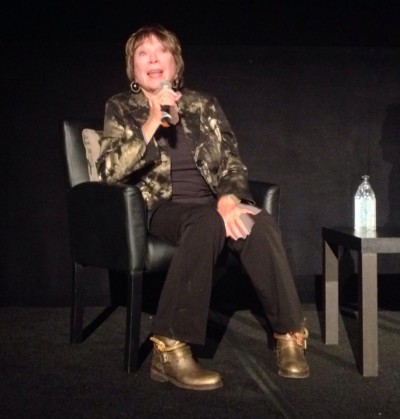 I hope to have my recap posted by the end of the day of my four fabulous days at the TCM Classic Film Festival in Hollywood.

But I had to share with you a very random and hilarious moment that happened on Sunday afternoon before the start of a screening of The Children’s Hour starring Shirley MacLaine and Audrey Hepburn.

I was sitting in the front row, center seat, determined to get some good photos of Miss MacLaine who was on hand for a Q&A. She arrives and takes the stage to a huge standing ovation. Then she sits down and the first thing she does is point to me and says: “Look at the way his bald head shines in the light! We could go bowling after this!”

The moderator, whose name escapes me, says to me: “Shirley MacLaine just said that about YOU!”

I laughed and hoped that was the end of it.

It was, thank God.

Anyway, it did remind me of my only other personal encounter with Miss MacLaine.

The year was 2009 at the Golden Globe Awards. She was nominated that year for Coco Chanel and after the show, she was waiting for her limo in the same area where I was waiting for the media bus.

We were both tired and started chatting and I told her that my friend Eddie and I knew every line to Postcards From the Edge. He was working in Africa at the time as a foreign correspondent so I thought it would be fun if she said a line from the movie into my tape recorder for Eddie. When she wondered which one I suggested: “Never let ‘em see you ache. That’s what Mr. Mayer used to say. Or was it “ass”? Never let ‘em see your ass.”

She looked a little confused because she couldn’t remember the line! I mean, it had only been 20 years since she made the film!

So instead she said into the recorder: ‘Good luck in Africa!’

That was it until six years later when she made fun of my bald head inside a packed Egyptian Theatre.

In my next life, I want to come back with a head full of gorgeous hair.

FILE UNDER: About Greg In Hollywood, Film Festivals