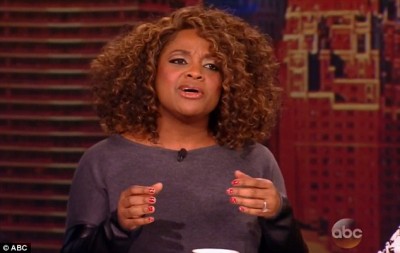 Here’s an idea, why don’t they just change the name of The View to The Whoopi Goldberg Show?

The word today is that Sherri Shepherd is out and that Jenny McCarthy is reportedly not far behind. This comes less than a month after the massive sendoff for the show’s co-creator Barbara Walters.

Shepherd confirmed her departure in a statement: “It’s been seven wonderful years on The View and after careful consideration it is time for me to move on. I am extremely grateful to Barbara Walters and [executive producer] Bill Geddie for giving me the opportunity. I look forward to the business opportunities that lay ahead for me and I am incredibly grateful to my ‘View’ family and my fans for supporting me on this journey.”

Shepherd began guest co-hosting on The View in 2006, and became a regular co-host the following year.

UPDATE: McCarthy, who just joined the show last fall, has tweeted: “If Sherri goes… I go too. #sisters.”

She added: “My View will be changing too. As will with many hard working folks. Thanks to everyone at the show for your dedication and an amazing year.”

It’s clear they want to start from scratch and build the show around Whoopi.

I think Allison Sweeney could be very good and she has just left Days of Our Lives.

Who do you think would be good on the panel?