Sex and the City Saturday: All about besties Carrie Bradshaw and Miranda Hobbs 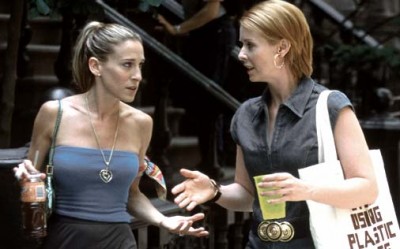 We know that Sex and the City’s Carrie, Miranda, Samantha and Charlotte are the best female quartet ever – well, at least right up there with The Golden Girls and the Designing Women.

But within the quartet, my favorite relationship is the one between Carrie (Sarah Jessica Parker) and Miranda (Cynthia Nixon). It’s funny, it’s moving, it’s genuinely close.

And like people who are close, they have had their fights but, thankfully, they work it out and hopefully we will get to see them together again on the big screen in a new SATC feature!

BONUS VIDEO: Sarah Jessica Parker appeared on The Ellen Show this week and Ellen asked her about the possibility of a third Sex and the City movie. SJP says there have been no real conversations about it but that there is a story to be told. Okay, so have some real conversations already and start telling that story! Time is ticking!