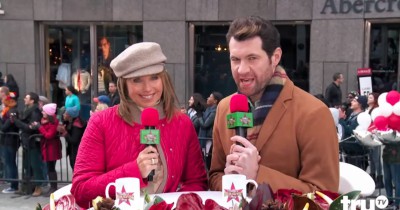 Thought you’d enjoy this video from three years ago of a Thanksgiving Day parade with a giant balloons of Maggie Gyllenhaal and Rooney Mara!

It could only be entries in the the first-ever Billy on the Street Thanksgiving Parade.

‘You want to make sure your kids are in the room for this because Maggie Gyllenhaal is coming to town!’ says comedian Billy Eichner who managed to convince none other than former CBS Evening News anchor and Today Show co-host Katie Couric to do commentary with him.

The parade is a celebration of some of Eichner’s favorite pop culture moments.