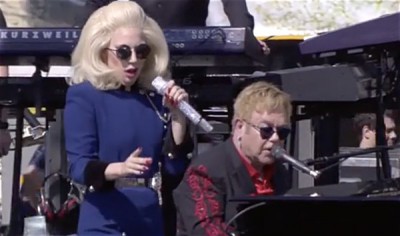 Elton John surprised fans with a free concert yesterday on the Sunset Strip in West Hollywood.

And the surprises didn’t stop there – Elton’s surprise guest was Lady Gaga who sang Don’t Let the Sun Go Down On Me with Sir Elton.

I didn’t make it down there since I’d already bought tickets to see Creed at the ArcLight (I now see why Sylvester Stallone is destined to win the Oscar tonight – he’s so good). Anyway, here are three of the numbers Elton performed.