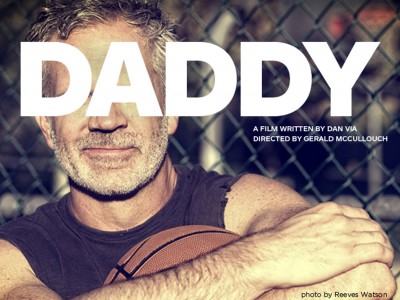 I described Gerald McCullouch as the sexiest man alive after seeing him in the film Bear City.

That’s my opinion and I’m sticking to it!

He’s also a very talented man who I met back in 2011 when he was starring in the play Daddy at the Hudson Mainstage Theater in Hollywood.

Daddy is now a movie and not only does Gerald recreate his stage role of an aging golden boy newspaper columnist, he directed the movie and made it happen! Dan Via wrote the script of his play and again plays a brilliant and witty attorney who is the golden boy’s bff.

Here’s the synopsis: Colin McCormack thinks he has it all — a great job, a steady stream of hot younger guys, and a best friend whose devotion he takes for granted. But when a charming and mercurial intern sweeps him off his feet, Colin sees a chance for something more: A family of his own. What he discovers instead is a shattering secret that may cost Colin everything — and everyone — he holds dear.