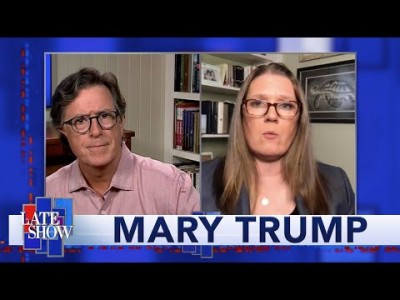 Believe me, I’m aware of what is going on in this country every day. I’m not posting much about Trump because I think we all need an escape from that.

But his niece, Mary Trump, is an interesting figure to me. She’s the lesbian daughter of Fred Trump Jr., the oldest of the Trump sons. She’s also a clinical psychologist who has come across as very credible in interviews aired in the past week to promote her book about the Trump family titled Too Much and Never Enough.

Stephen Colbert talked to Mary last night about the book that analyzes her uncle’s psyche and she describes the specific observations that inspired her book’s title. As a child, Mary Trump witnessed sociopathic behavior from her grandfather Fred Trump, Sr. and she observes similar sociopathic tendencies in the behavior of her uncle. She also notes that the cognitive test her uncle keeps bragging about isn’t a test of smarts, it’s a test typically administered to screen for the onset of dementia.