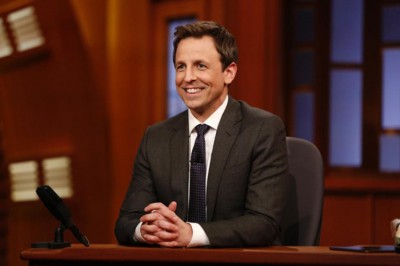 My favorite line uttered by Seth: “Mike Huckabee. You a creep.”

Meyers highlights some of the misinformation and tactics used by opponents of HERO to get it defeated by a large margin.

‘Opponents of the law claimed falsely that the bill would allow anyone of any gender to walk into any bathroom they wanted. The idea is known as the “bathroom myth” and the anti-HERO ads focused heavily on it,’ Seth said before showing viewers some of the ads.

‘The ads focused exclusively on the bathroom issue even though the law had nothing to do with that. There’s also no evidence that this has ever been a problem in places that do have these laws. But unfortunately the ads worked.’

Seth quoted a Houston resident who had said to BuzzFeed News: ‘The only thing that I have heard is that it allows men who dress up like women going into the ladies room. If a person woke up one day and said, “I identify as a woman,” he could just go into the bathroom to see booty.’

The talk show host pointed out the absurdity of the remark: ‘I’ve never been in a woman’s restroom, but I’m guessing the booties aren’t just out for everyone to look at. And if they are, I’m pretty sure you’re doing something wrong. Also the restroom is the five minutes of the day you don’t want to see the booty. That’s when the booty is busy. More importantly, the idea that you could go into a bathroom and do anything other than use the toilet is already illegal in Houston.’