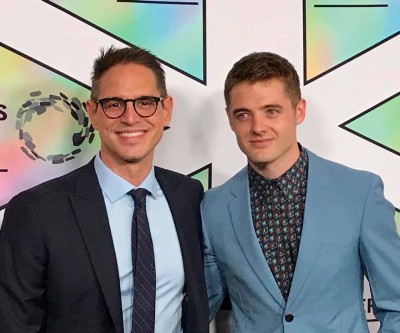 I’ll have several more posts from the LA LGBT Center’s 49th Anniversary Gala Vanguard Awards which were on Saturday night.

I’m so proud to work at the center which does so much for so many.

Love, Simon star Nick Robinson showed up to honor his friends, Greg Berlanti and Robbie Rogers, whom he got to know while filming the lead role in Berlanti’s film playing a gay high school student in the first major studio romantic comedy to feature such a storyline.

“Sometimes when you shoot a movie, it’s just a job,” Robinson said. “You show up, you do the work and head home and collect a paycheck. On our film, things got very personal.”

That’s when Berlanti took to the stage with rogers he said: “We hope our son grows up to be just like Nick. Except the actor part. Please, God, don’t let our son be an actor.”

Rogers paid respect to the many LGBT individuals who paved the way at the Center and in society but added: “Our safety and equality and basic liberties are under threat, now more than ever. There are others, many of them elected officials, who not only don’t want to see advancements for the disenfranchised, they want to take us back to a time when our story wasn’t even possible.”

The couple got a standing ovation when Berlanti closed by saying that often, “growing up gay is hardest at times to receive the love that you really deserve. You are your own success story.”