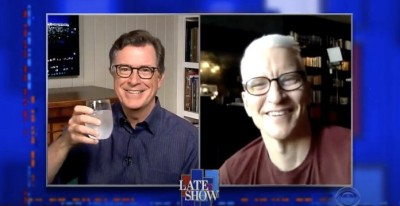 New daddy Anderson Cooper was the guest last night on A Late Show With Stephen Colbert.

“It’s extraordinary,” Anderson says of fatherhood. “It’s astonishing. I just stare at him and hold him and I just can’t believe. I just can’t believe that A) he’s going to depend on me and that he belongs to me, that he’s here. I’ve always dreamed about it, but I never thought I would actually be able to do it. It’s just incredible. It’s like tectonic plates shifting except it doesn’t leave you in rubble.”