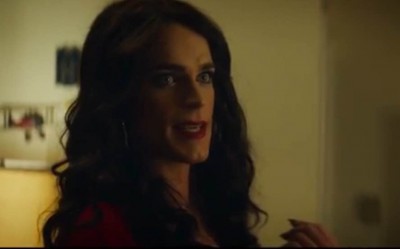 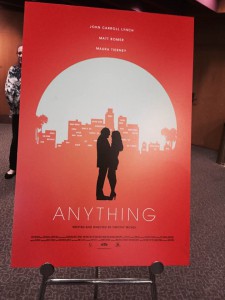 I was among those invited to attend an early screening of the film Anything at the DGA Theatre last night. The story centers on a Mississippi man named Early Landry ( John Carroll Lynch), who after losing his wife is forced to move to Los Angeles so he can be cared for by his over-protective film executive sister (Maura Tierney). Landry quickly moves out of her upscale home to start a new life on his own in a small apartment complex in Hollywood. He quickly becomes enamored by his neighbor, a transgender prostitute named Freda (Matt Bomer). His loneliness and need for companionship leave his heart open to what starts as a friendship then grows into something deeper. But can their growing affection be reconciled with the complexity of their disparate backgrounds? There’s been controversy over Bomer portraying a transgender character instead of a transgender actress. That aside, I must say he is wonderful in the role. The Emmy-nominated actor gives the character of Freda heart and a combination of vulnerability and strength. He is absolutely believable in the role. Lynch is a revelation in what I think is the role of his career and Tierney outstanding. The movie has its world premiere this weekend at the Los Angeles Film Festival.