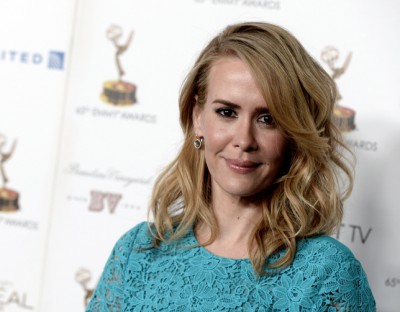 Last Friday, I saw Carol and it features a very strong turn from Sarah Paulson as Cate Blanchett’s best friend and former lover.

She’s such a good actress and so different in each role from her various characters in the American Horror Story series to such films as 100 Years a Slave, Game Change and one of my faves Down With Love which was the first time I really noticed Paulson.

Down With Love came out in 2003 and two years later Paulson got even more attention when her then-girlfriend Cherry Jones won a Tony Award for her performance in The Heiress.

She and Paulson kissed before Jones took the stage to accept her second Tony.

‘I was very young, and I was in love,’ she says in a terrifically candid new interview with PrideSource.

“It was the reality of the person I was with. She just won a Tony Award – I’m not gonna pat her on the back, give her the big thumbs up and say, “Go up there and get your award, sweetie.” It was not a really conscious thought. I didn’t think of what the implications were gonna be. I just did what was true and honest to me in that moment.”

Still, Paulson considers herself to be a character actress and for that reason she prefers to be low-key about her private life.

‘My personal life… I’m not gonna hide it from you, but I also don’t want you to think about that before you think about the character I’m playing,’ she says.

‘The thing with Cherry was very accidental. And, again, I was very young. If it happened to me today, I don’t know what I would do necessarily. I really don’t. I think what I’d like to think is that I would just be who I am and whomever I was with, if I had won an award or they had won award or if it was some kind of public thing, I would not do what I would do simply because I was afraid of being revealed. I don’t think that would be a choice I would make. But I think it was hard a bit because when she and I broke up (in 2009) there were some public statements said by her in, I think, an accidental way that ended up being hurtful to me, so I’ve been very kind of careful now about what I’m willing to talk about in terms of specifics.’

Although her most famous romance was with a woman, Paulson considers herself to be bisexual.

‘I’ve done both, and I don’t let either experience define me. I don’t let having been with a man make me think I am heterosexual, or make me want to call myself that, because I know I have been attracted to women – and have lived with women.

‘I can meet a man tomorrow and fall in love with him and marry him and I wouldn’t discount any of the experiences that I’ve had with women, or vice versa. I just don’t think anyone is in a position to dictate what that is for me. I understand why the call is what the call is, and that’s also why I don’t hide it. I don’t pretend it’s not true. It’s just, I have to be honest about what’s true for me, that things kind of coexist.’