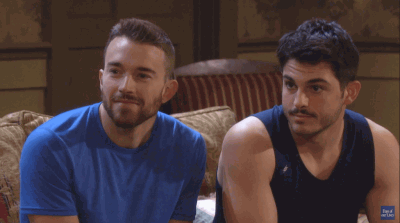 They lost me as a regular viewer back in 2020 when they wrote out the gay couple of Will and Sonny played by Emmy winners Chandler Massey and Freddie Smith. I did watch, happily, the Beyond Salem event on Peacock where Massey returned as Will and Zach Tinker appeared as Sonny in place of Smith. They returned again for Peacock’s Days of Our Lives: A Very Salem Christmas.

A new 30-second video featuring Billy Flynn as Chad DiMera over on the soap’s multiple social media accounts that both Massey and Tinker would be returning to Days of Our Lives sometime after the soap returns from its Olympic hiatus on February 21st. While not much else is revealed about Will and Sonny’s return to Salem, it is revealed that Will and Sonny along with best friend Chad will be dealing with the return of con man Leo Stark, played by the delicious Greg Rikaart.

I do hope they will get to stay awhile.