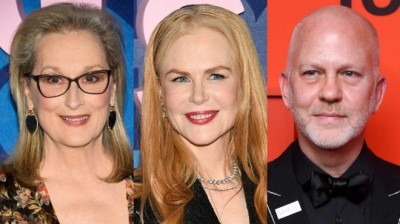 Ryan Murphy continues to make the world a better – and gayer – place.

A more LGBTQ+ place to be more accurate.

Deadline Hollywood broke this news exclusively: Not yet a year into his expensive five-year deal with Netflix, Ryan Murphy is about to deliver his biggest get for the streamer. Deadline hears he will direct and produce the feature adaptation of the Tony-nominated stage musical The Prom and has secured a cast that puts Netflix in new starpower territory.

Meryl Streep will star alongside James Corden, Nicole Kidman and Ariana Grande, with Awkwafina, Keegan-Michael Key and Andrew Rannells playing key roles. Sources said Murphy will get underway directing the film adaptation of the Broadway hit in December, for a fall 2020 awards season release in theaters before it airs on the streamer.

In Prom, Streep will play Dee Dee Allen, a two-time Tony winner who teams with Corden’s Barry Glickman in a flop musical about Eleanor Roosevelt. After career-ending reviews, they decide — along with Broadway babies Kidman as Angie Dickinson and Rannells (Book of Mormon) as Trent Oliver — to champion a cause to rehabilitate their careers. They find one in Emma, a high school senior in Indiana who isn’t allowed to take her girlfriend to the prom. A nationwide search led by casting director Alexa Fogel is on to fill the role of Emma.

Grande will star as Alyssa, a popular daughter of the head of the PTA. Awkwafina will play the group’s publicist Ms. Sheldon, and Key will play Streep’s love interest and Emma’s ally, Principal Hawkins.