He also talked to AfterElton.com about some of this season’s developments and, in particular, new cast member Darren Criss who Murphy confirmed is now a regular at least for this season and next.

Here are some excerpts from his conversation with Lesley Goldberg:

AfterElton: How many episodes is the anti-bullying story line going to be?
Ryan Murphy:
I think it’s a whole year, actually. It’s not a couple episodes; it will probably be the whole season, actually, and the ramifications on everybody, which I think is important. 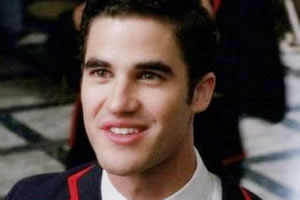 AE: How is Blaine going to play into that?
Murphy:
I don’t know. We’re just writing him now. Darren has become such a sensation in one week, which I love. I think there’s a hunger for him and a positive relationship role model. He’ll definitely continue through the year and longer. We just signed a deal with him, so I don’t know.

AE: He’s confirmed to be a regular for the remainder of Season 2 and next season as well?
Murphy: Yes.

AE: If he doesn’t wind up becoming Kurt’s boyfriend, are we going to see Kurt have a boyfriend?
Murphy: Kurt will definitely get a boyfriend. The question is who will it be and how will it be.

AE: What was it about Darren Criss that initially appealed to you?
Murphy: He had auditioned and auditioned many, many times and I personally never saw his auditions. Then when we were casting, the casting director said, “You gave us many choices.” As soon as Darren came on and [I saw] his audition, I was like, “That’s the guy.”