Bob Harper three years after heart attack: “I am so lucky and blessed to be here now” 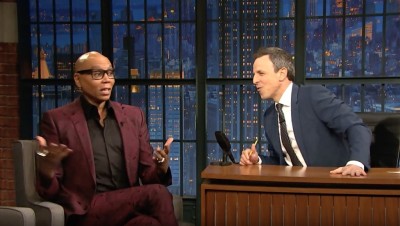 Did you miss last night’s episode of Late Night With Seth Meyers?

Sleeping were you? Good for you!

But have no fear because I have posted RuPaul’s appearance right here for you to watch. The drag legend is fresh off of his triumphant appearance hosting Saturday Night Live.

It was so interesting to hear about how Ru created his image: “What I did was add one part Dolly Parton to two parts Cher, one part David Bowie and a big heaping spoonful of Diana Ross. And this is scientific. I took the subversive sexuality out of my persona so that Betty and Joe Beercan could invite me into their living room, and you know what? It worked!”

Bob Harper three years after heart attack: “I am so lucky and blessed to be here now”