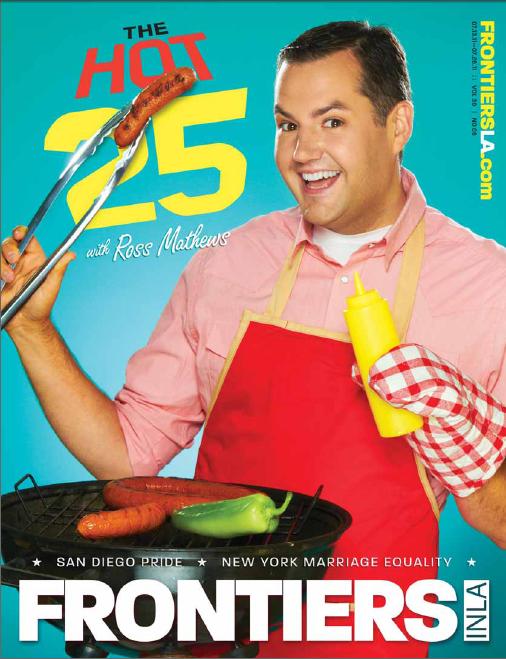 After nearly a decade as a correspondent on The Tonight Show and with his weekly appearances on Chelsea Lately, it’s no surprise to find  bright and funny Ross Mathews on the cover of Frontiers IN LA’s The Hot 25 issue.

If Ross looks slimmer to you, it’s because he is! He recently lost 40 pounds on the Jennie Craig program. Here are some excerpts from his interview with Jackie Beat:

How do you feel being named one of Frontiers’ “Hot 25”?
It is an undeniable honor, and what I love most about the annual list is that it’s never just celebrities. There are so many LGBT heroes in our community—from politicians to artists to teachers to health workers—and I love seeing them represented as well.

Thanks to your countless appearances on The Tonight Show, you are officially America’s favorite “gay boy next door!” Tell us something about yourself that might shock us.
People may be shocked to learn that I’m a major partier. Oh, I’m not a glow-stick, coked-up, afterparty kind of guy, but I do enjoy one thing above all others—happy hour. I’m a sucker for a half-priced appetizer and 2-for-1 glasses of pinot grigio!

You have met a lot of famous people over the years. Who impressed you the most and who was the biggest disappointment?
The best was, hands down, Gwyneth Paltrow. I asked her to be my best friend when we first met on the red carpet at the Vanity Fair Oscar Party in 2002. She emailed me the next day and has been my BFF ever since. She’s good people, that lady. It sucks the big one when you meet someone you admire and they’re totally lame-o. It’s happened to me a few times. I can’t name names, but if you really want to know, just corner me during happy hour when my lips are certain to be more loose!

Sadly, being gay is still a struggle for so many—especially young people. What would be your message to anyone who is going through a rough time right now?
My message to anyone going through a rough time right now because they’re ‘L,’ ‘G,’ ‘B’ or ‘T’ is to look around you. It’s a new and different world. There are people like me—me!—on national television. It may feel like you will never be accepted. But I promise, there are places not far from you where you’ll be celebrated! It will be OK, I swear.

What else do you have on the horizon?
I’m nearing my 10th anniversary as a correspondent on The Tonight Show, I’m on Chelsea Lately every week and I have also started guest-hosting when Chelsea is out of town! I’m continuing as a Jenny Craig spokesperson, touring the country speaking at colleges and writing a book. But more importantly, I am a partner, a gardener and the proud doggy daddy to the cutest malti-poo and chihuahua you’ve ever seen. Life is really freakin’ good!