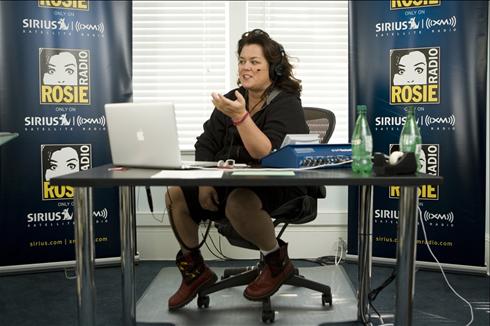 After all the millions she made doing her daytime talk show, Rosie O’Donnell probably doesn’t have to work much anymore.

She’s already tackled stand-up, movies, Broadway, a magazine, a blog and written three books. So what is left for this 47-year-old force of nature who wears her heart on her sleeve?

The former co-host of The View and one of the highest-profile lesbians in the country launches her new Sirius XM satellite show on Nov. 7 which will air live each weekday from 10 a.m. to noon.

The best part is she gets to work from home (either on the Hudson River or in Miami) and confessed to a USA Today reporter after doing a recent practice show that she wasn’t even wearing a bra!

Aside from a flop variety special a year ago and some appearances on stage and on television, Rosie has relatively low-key since she quit The View two-and-a-half years ago after a stormy one-year stint that generated big headlines and big ratings.

As she mulled over what to do next professionally, the mother of four realized one thing: “I knew one thing for sure: I didn’t want to leave home.”

Rosie tells the newspaper that she intends to be more like fellow Sirius broadcaster Howard Stern and keep that low profile. Stern shares all of his opinions on the air and rarely appears on talk shows or interviews and also avoids red-carpets.

Rosie vows that for the “second half” of her life, her quest is “just to be authentic.”

Rosie has signed a two-year contract and said she looks forward to a lack of censorship, something she did not enjoy on The View.

“In some ways it was like the McCarthy era. If you questioned anything after 9/11, you were unpatriotic. There were good people and bad people. There were evildoers, all of a sudden. It was a very trippy time to be an American.”

Not only is she on radio now and in a venue that lends itself to her candor, but the country has changed its president.

“And that’s why Obama won the Nobel Prize, much to the chagrin of every carnival barker on Fox,” Rosie says. “But the fact of the matter is, the world stood up in unison and gratitude and said, thank you, perhaps the beacon of light and hope that America has been for 200 years is once again lit. It was diminished criminally by the last administration.”

Rosie insists that she is not going to be real political on the show but OF COURSE she is! She won’t be able to help herself – thank God!