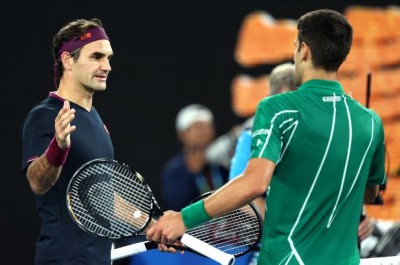 The Australian Open is so good this year and the whole thing has left me sleep deprived. Was awake until past 3 am watching the Roger Federer-Novak Djokovic semifinal which an injured Fed lost 7-6, 6-4, 6-3.

Not the outcome I wanted but after Fed survived two five-setters and seven match points in earlier rounds, I was just happy to see this warrior on the court competing. But a groin injury made the outcome a forgone conclusion after a close first set.

“Today was horrible to go through what I did,” Federer said after the match. “Nice entrance, nice sendoff, and in between is one to forget because you know you have a 3% chance to win. You know, got to go for it. You never know. But once you can see it coming, that it’s not going to work anymore, it’s tough.”

At 38, the six-time Australian Open champ believes he can still add to his record haul of 20 grand slam singles titles.

“I do believe that,” he said. “I think by having the year that I had last year, also with what I have in my game, how I’m playing, I do feel that. You never know what the future holds. But especially my age, you don’t know. I’m confident. I’m happy how I’m feeling, to be honest. I got through a good, nice training block. No plans to retire. From that standpoint, we’ll see how the year goes, how everything is with the family. We’ll go from there. Of course, I hope to be back.”