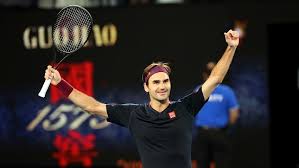 I’m a bit of a groggy mess because I woke up at 3 am and flipped on the Australian Open on ESPN and my all-time favorite player Roger Federer was involved in a nail-biter of a match that he came two points from losing!

It was Federer’s 100th match win at the Australian Open where he has played each of the last 21 years. He is a six-time champion with his most recent titles coming in 2017 and 2018.

“Oh God, it was tough,” Federer told former World No. 1 Jim Courier in an on-court post-match interview. “Thank God it was a Match Tie-break, otherwise I would have lost this one. Where to start? I think John played a great match… He is a great fighter, a good guy and it came down to the wire at the end. A bit of luck maybe goes one way. I had to stay so focused, take the right decision. He was doing all that stuff at the beginning of the Match Tie-break, coming up with the goods and I thought, ‘Okay, I guess I tried.’ I didn’t play too bad after all and I was getting ready to explain myself in the press conference… What a match and John deserves over half of this one.”

it was a helluva match and it’s a pity there had to be a loser. But I’m rooting hard for Fed to win his seventh title and 21st grand slam crown overall.