We know that given the right role, Renee Zellweger can be dazzling.

Chicago, Bridget Jones’ Diary, Jerry Maguire and Down With Love are proof of that. Then there are times, like with Leatherheads and New In Town, where it’s just painful to watch!

Fortunately, Renee’s current film My One and Only is one of her gems and since it went into wider release this weekend, I wanted to take this chance to highly recommend it.

Here’s the plot: Beautiful, mercurial Ann Devereaux (Zellweger) has just left her philandering husband Dan (Kevin Bacon), a society bandleader, and taken to the road with her teenage sons, George (Logan Lerman) and Robbie (Mark Rendall), in search of a wealthy replacement mate.  But it’s 1953, years past Ann’s courting days.  Now it seems that the losers and playboys outnumber the eligible and willing bachelors.  As the miles roll by, their journey veers from eccentric, to hair-raising, to poignant, to comic.  The three travelers get to know each other much better than they’d ever expected.

Ultimately, George discovers the determination, dignity and love underneath his mother’s self-absorbed exterior.  And Ann makes a different family for herself and her sons than any of them had imagined.  The story is inspired by real events in the adolescent life of actor George Hamilton’s adventures with his mother. 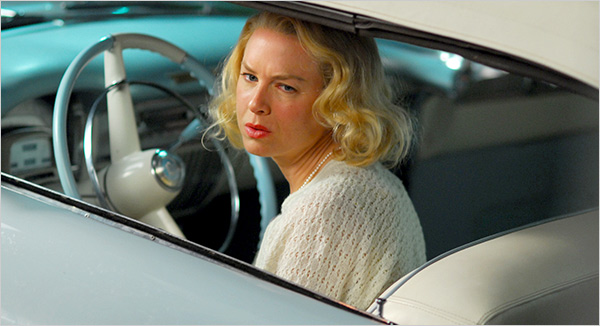 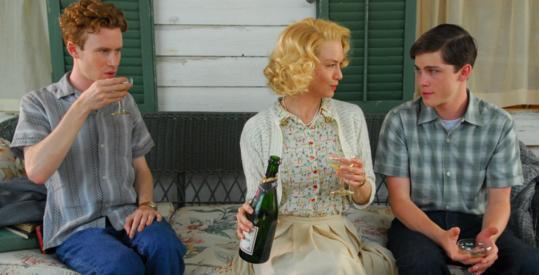 The heart of the film is the relationship between Renee’s character and her two sons. What I really love is that Robbie (Rendall) is clearly gay and even though this is set in the 50s, his mother and brother accept him wholeheartedly as he needlepoints and vamps his way across the country. He has a strong sense of himself and goes about his way.

I didn’t have any problem with Robbie being a stereotype because it is a wonderful character who gets to be himself.

What more can you ask for?