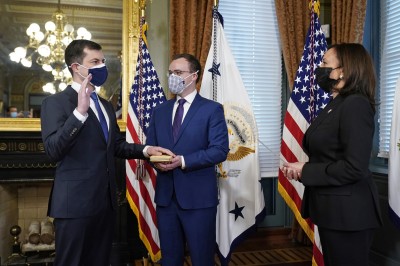 Pete Buttigieg broke multiple barriers this month when he was sworn in as President Joe Biden’s transportation secretary. He became the first openly gay Cabinet member to win Senate confirmation and the youngest person, at 39, to lead the U.S. Department of Transportation.

“You can really feel the history swirling around us when the vice president was swearing me in with my husband, Chasten, at my side,” Buttigieg said in an interview with NBC News’ Snapchat show “Stay Tuned.” Vice President Kamala Harris, like Buttigieg, made political history this year: She is the first woman and first Black and South Asian person to hold the country’s second-highest office.

In the interview, Buttigieg also speaks openly about his Christian faith.

While nearly half of LGBTQ Americans identify as religious, Buttigieg acknowledged that the two communities are sometimes pitted against each other.

“As a married gay man and as a believer, I think about this a lot, and sometimes I do feel like we have to sort of defend the LGBTQ community within the church,” he said. “Then again, there are a lot of times when I feel like I’m defending the church in the LGBTQ community or the progressives — especially because there are so many people in our community whose experience with faith or with religion is one of exclusion and one of hurt.”

Here is a link to the FULL INTERVIEW.