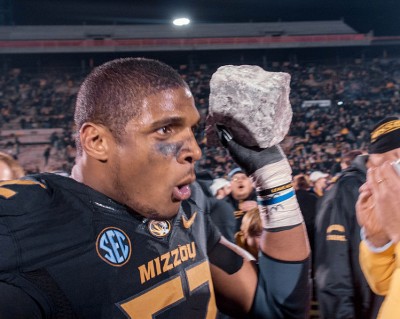 Saying it does not want to be a distraction, the Oprah Winfrey Network announced Friday that it is postponing its plans to make a documentary series on Michael Sam becoming the first openly gay player in NFL history.

Last weekend, Sam was drafted by the St. Louis Rams in the final round of the draft. The decision to delay the series came after a meeting between the Rams and OWN.

‘After careful consideration and discussion with the St. Louis Rams, The Untitled Michael Sam Project has been postponed, allowing Michael the best opportunity to achieve his dream of making the team,’ OWN President Erik Logan said in a statement.

Logan added: ‘OWN is about elevating and empowering people to achieve their best. It’s clear that we, along with the world, recognize the important opportunity that Michael now has in this moment. We will continue to support him in his journey to earn a spot playing for the Rams.’

The series had been announced just Wednesday with Winfrey saying the series ‘promises to spark valuable, important discussion on life in America today. Acceptance and illumination start here.’

Sam had said in a statement this week that his focus was on making the team but added ‘if seeing my story helps somebody else accept who they are and to go for their dreams too, that’s great. I am thankful to Oprah for her support and excited to work together.’

The series was to be made for OWN by Pilgrim Studios and Amy Rice.

Sam’s agent, Cameron Weiss, issued a statement Friday that the postponement will ‘allow for Michael to have a total focus on football, and will ensure no distractions to his teammates.’

Weiss added: ‘Everybody involved remains committed to this project and understands its historical importance as well as its positive message.’