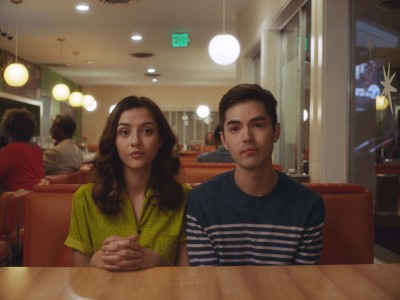 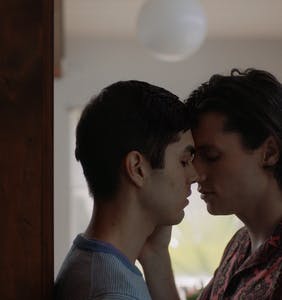 Okay, I’m back from vacation and ready to begin my Outfest 2019 coverage in earnest.

There has been a lot of buzz about Straight Up which screens tonight and again tomorrow. The movie was written and directed by James Sweeney who also stars as Todd, a gay man with OCD who doesn’t like gay sex and decides he might not be gay at all. When he meets struggling actress Rory (Katie Findlay, of How To Get Away With Murder), he decides to “go straight” and enters into a sexless but emotional relationship.

Todd and Rory find plenty to enjoy in one another but one major question lingers: can they be in love without ever wanting to have sex?

Set among a young and witty Los Angeles crowd that’s equally hip to Cat on a Hot Tin Roof and Sabrina the Teenage Witch references, Sweeney’s film allows its extroverted social circle to have refreshingly frank discussions about 21st century sex and dating rituals, making them the perfect outlet to explore just how elastic our definitions of love and sexuality can get. The cast includes guest appearances from Randall Park, Betsy Brandt, and Tracie Thoms.

Here is a Q&A with Sweeney sent to me by publicists:

How did you come up with the idea for Straight Up? Is it autobiographical?
James : When I was 21, I calculated a mathematical breakdown of why I was still single. (Hint: that should have been the answer). Basic arithmetic—queer people have fewer chances of finding love because there are less options. And most of our generation is driven by a very westernized notion of soul mates—that a partner has to complete you emotionally, sexually, and intellectually. ‘You can do better’ is an American catchphrase. But what if someone can’t do better? I was inspired to bring two characters together who align perfectly, minus the sex. Straight Up is personal, but not strictly autobiographical.

Why did you cast yourself? Were you easy to direct or difficult to control?
James: I wrote the role for myself, but that proved to be the largest obstacle in attracting producers and financing for obvious reasons. That said, I felt it was vital that Todd be played by a gay actor because if an audience knows they’re watching a straight actor pretending to be gay pretending to be straight, it would color the chemistry and comedy differently. Also, the dialogue has a specific rhythm and I didn’t want to give line readings for how I would say things. Just let me say the things. Eventually I convinced enough people to allow it to happen; but acting and directing (and producing and location managing and you get the picture) was rough. In a case of life imitating art, I developed stress-induced hand eczema that still hasn’t fully gone away.

What about Katie Findlay? Were you friends beforehand, or how did you cast her?
James: Nope, Katie was new to my life. I worked in casting for a few years and I do believe that is 90% of directing. Jessica—our casting director, who stepped up at the eleventh hour—gave me my first job in LA, and now Straight Up is her first feature credit, so it was very kismet how it all worked out. She really vouched for me. Anyway, for Rory—we put out a breakdown for “Female in her 20’s, struggling actress” and of course received over 3000 submissions. Katie was not one of them but I had her on a list. I always have lists. She taped from Vancouver and then we skyped and it was immediately clear she was my woman. Honestly, this whole cast was a blessing and I couldn’t be happier. The one upside of being so low budget is that everyone on set wants to be there.

Did you have a rehearsal process?
James: As much as we could afford, which was limited. Before production, I flew to Vancouver to rehearse with Katie; and it was instrumental in breeding familiarity, but it wasn’t ‘performance ready’ and I was still futzing with the script. So I was feeling insecure come Day 1 of principal which was six pages of dialogue. The very first shot we filmed was the library scene where Todd and Rory meet. And thankfully, it clicked. Afterwards, Katie tells me: “See? It’s going to be okay.” And we ended up using that take, so for that three-minute shot, you’re actually witnessing the first time we ever acted on camera together. Also, in Los Angeles, we had a one day rehearsal/wardrobe fitting at my apartment with Katie, Dana [Meg], Scully [Ryder], and Josh [Zane]. Clothes and scripts everywhere. It was chaos. I kind of miss it.

Do you think you a relationship without sex is sustainable?
James: Yes. There are studies that show couples with healthy sex lives are happier, so I don’t mean to discount the importance of sex and physical intimacy, but I do think we have a tendency to shame people, especially young adults, who aren’t ‘getting any’. Not everyone chooses to have sex. Aesexuality is the last letter in LGBTQIA, if included at all. As for Todd and Rory–they both have their own reasons for commiting to a non-physical relationship. For Todd, his OCD is primarily the culprit, and that’s pretty constant. However, we see Rory crave heteronormativity the more she falls in love with him, so as her needs change, what once was perfect is no longer enough.

Romantic comedies are making a comeback, and Straight Up is certainly a twist on the genre. What are your film influences?
James: I say it’s a modern Kissing Jessica Stein, but we have different references for different reasons. Wedding Banquet and Chasing Amy for sexual politics, Silver Linings Playbook and As Good As It Gets for mental health within comedy, Ida and Columbus for cinematography, Bringing Up Baby for blocking, 500 Days of Summer for general style, and “Gilmore Girls” for never lingering on a joke or pop culture allusion.